Cape Tribulation is located on the northeast coast of Queensland, Australia, and is often marketed as the place where the rainforest meets the reef. And not just any old rainforest and reef — Daintree, the world’s oldest tropical rainforest, and none other than The Great Barrier Reef. Both are on the UNESCO World Heritage List. It’s no wonder that Cape Tribulation is one of the most unique places in Australia.

When is the best time to visit Cape Tribulation?

The best time to visit Cape Tribulation is in the dry season between May and November. The period from May to September is often recommended in particular. July and August are the most popular months. We visited the area in mid-October and had perfect weather. In the dry season, temperatures are usually comfortable, and if you plan to go snorkeling on the reef there is less chance of encountering marine stingers.

There are many options for accommodation around Cape Tribulation. You can stay in Cairns (about 140 kilometers away) or Port Douglas (about 85 kilometers away) and go on a day trip from there. Group trips are also arranged from these places.

However, we recommend that you rent a car and drive, since you will have more freedom to stop exactly where you want. In addition, it is a good idea to start the trip even closer to Cape Tribulation, or to add one or more overnight stays in the area. In this way, you get time to experience more of the wonderful surroundings.

We used Daintree Ecolodge as our base. It is located in Daintree Rainforest just south of Daintree River. From here it is only a 10-minute drive to the ferry that takes you across the river to Cape Tribulation. Daintree Ecolodge had very nice staff and comfortable rooms (treehouses), but we found that we paid a relatively high price compared to the standard in the area. The location, on the other hand, was unbeatable, allowing us to cross the river before the tourist buses arrived.

For those who want to spend more than just a few hours in Cape Tribulation, there is also a selection of accommodations there. If you go for this option, we recommend that you book in advance.

To get to Cape Tribulation, you have to cross Daintree River using the Daintree River Ferry. The crossing itself only takes a few minutes, but in high season you should expect lines in the morning between 10 a.m.–12 p.m. and in the afternoon between 3 p.m.–5 p.m. It is therefore a great advantage to start the day early.

Link to more information about the Daintree River Ferry

Itinerary and places to stop

Cape Tribulation has a wide range of sights, and one day is far from enough to see all of them. If you decide to do this anyway, it is a good idea to spend some time planning in advance. We visited seven places during our day trip to Cape Tribulation and had a wonderfully nice but quite busy day with limited time at each stop. In total we visited three different beaches, but in retrospect we could have dropped one of these since they were all relatively similar.

We chose to drive straight up to Cape Tribulation without stopping along the way in hopes of avoiding most of the other tourists. This plan turned out to work well since many of the other cars stopped on their way north, while we instead worked our way south. By driving all the way up to Cape Tribulation Beach first, we got to have it almost entirely to ourselves. As we moved south through the day, we met more and more other tourists. Below is an overview of the places we stopped at in chronological order from north to south.

Cape Tribulation Beach is the actual point where the rainforest meets the reef. Here, the bright green vegetation extends all the way down to the water’s edge and creates an exotic atmosphere. The stunningly beautiful beach practically begs for sunning and bathing, but the latter is unfortunately strongly discouraged. At the risk of bumping into both crocodiles and stingers in the water, it is safest to stay ashore. From the beach there is a path, Kulki/Cape Tribulation Boardwalk, up to a lookout point which we did not take the time to check out.

After a quick cup of coffee at Turtle Rock Cafe and Bar (their flat white coffee was absolutely delicious) we took a short walk to the next beach, Myall Beach. Myall Beach has a lot in common with Cape Tribulation Beach, and you really get the tropical vibes in both places. There were a couple more people on the latter, but still very few in general. Near Myall Beach you will find the Dubuji Boardwalk — we only walked down a small part since we had planned to walk a couple of other trails instead.

Just a 10 minutes’ drive south of Cape Tribulation lies Madja Boardwalk, an accessible boardwalk that takes you through the jungle. The 1.2-kilometer trail is wheelchair-friendly and offers both mangrove and rainforest views with signs explaining what you see. Along the way you have the opportunity to see various fish such as barramundi and shrimp. We saw several kinds, as well as a cleverly camouflaged lace monitor lizard.

Link to more information about the Madja Boardwalk

Thornton Beach is another paradise beach with silky soft sand and bright green palm trees. Like the other beaches in the area, swimming is not recommended here either due to crocodiles and stingers. But the beach is still a perfect place for a picnic or a walk in the beautiful surroundings.

The Daintree Ice Cream Company is a popular stop on the way to or from Cape Tribulation. Ice cream is made here from local organic ingredients. The exotic fruit that turns into ice cream and sorbets is grown on site, and visitors are welcome to stroll around the orchard. The ice cream is sold in cups with four different flavors that change daily based on which fruits are currently ripe. When we visited the Daintree Ice Cream Company, the flavors of the day were coconut, passion fruit, jackfruit, and wattleseed. The ice cream may not have been the best we’ve ever eaten, but it was still a lot of fun to test the exotic flavors.

One of the highlights of our day trip to Cape Tribulation was hiking the Jindalba Boardwalk. This boardwalk is not as flat as the Madja Boardwalk and is unfortunately not wheelchair-friendly. It is nevertheless well arranged with steps, railings, and benches. The walk is only 700 meters long, but you still get the feeling of penetrating deep into the jungle. As on the Madja Boardwalk, there are signs describing the local plants and animals. We thought it was very exciting to stroll under high treetops while we scouted for the strange cassowary birds that you can glimpse along the trail if you’re lucky. To our disappointment, we didn’t see any.

From Jindalba Boardwalk it is also possible to walk a longer route of almost three kilometers. This path goes through tougher terrain and is suitable for the more adventurous.

Link to more information about the Jindalba Boardwalk

The Mount Alexandra Lookout is a great place to take one last break before taking the ferry back. From here, you get an expansive view of the rainforest, as well as the point where Daintree River meets the sea. The lookout point is right by the road and there were plenty of free parking spaces when we stopped there.

Other activities in the area

Tour of a tropical fruit farm

At Cape Trib Farm you can learn about the exotic fruits grown on the farm and get a taste of them too.

Snorkel at The Great Barrier Reef

Join a guided tour of the rainforest

The Daintree Rainforest company offers various tours and has received very good feedback on the internet.

Go horseback riding on the beach

On the way to Myall Beach you will learn about the local flora and fauna.

Explore the rainforest at several heights

Link to the Daintree Discovery Centre

Cruise on the Daintree River

There are several companies that arrange cruises on the Daintree River. We went on a trip with the Solar Whisper one of the other days we were in the area and appreciated that they offer an environmentally friendly alternative with their solar electric boat. Unfortunately, we were unlucky with the weather and water level during our cruise and saw only one small baby crocodile. It therefore pays off to call ahead and ask when there is the greatest chance of seeing crocodiles. (This is usually when the water level is low and the temperatures are not too high.)

Link to the Solar Whisper

* We visited Cape Tribulation in October 2019. 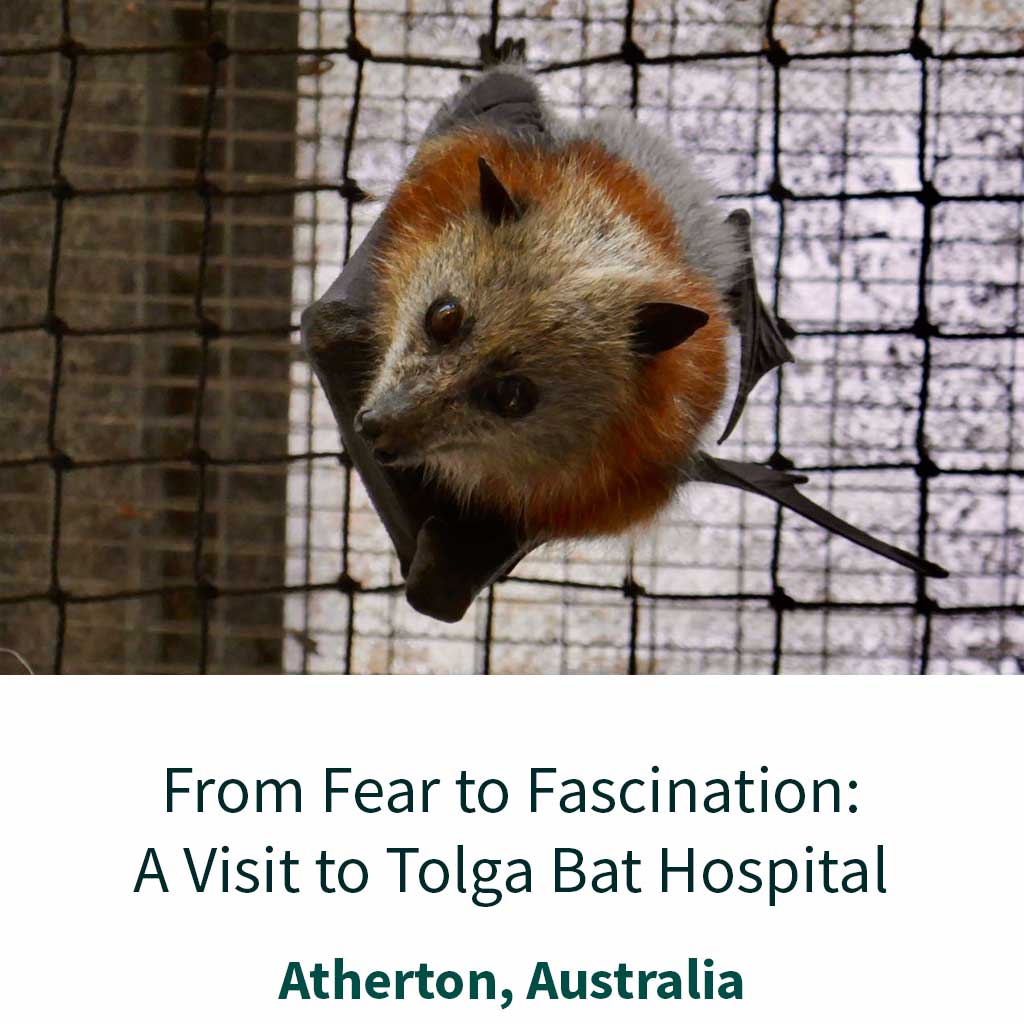